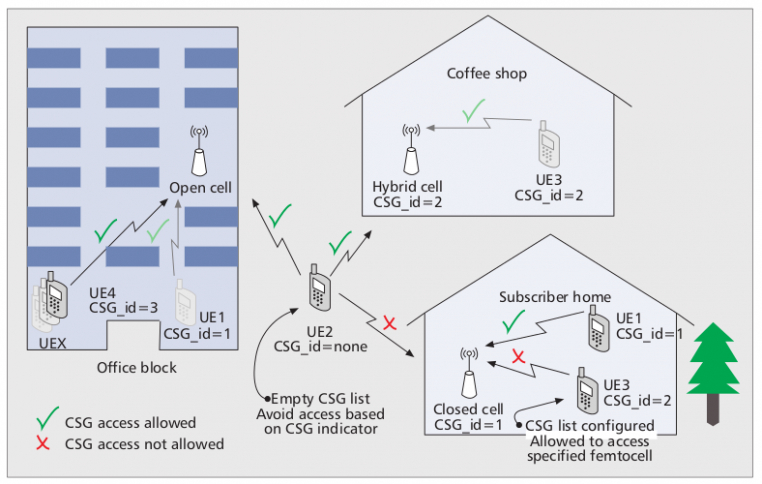 Femtocells are low-power and low-cost base stations that provide residential cellular services, providing a coverage of roughly 10 m [1]. They can integrate with mobile operator through a broadband connection, typically ADSL. In General, femtocell makes that the traffic from the home cellular system, deviates through the broadband connection, releasing the resource consumption of the macrocell.

The 3GPP has introduced the concept of Closed Subscriber Group (CSG), which essentially identifies a group of subscribers who have access permission to one or more cells. Femtocells basically have three different operating modes: open access, closed access and a combination of both named hybrid access [2] and [3], the access methods are: 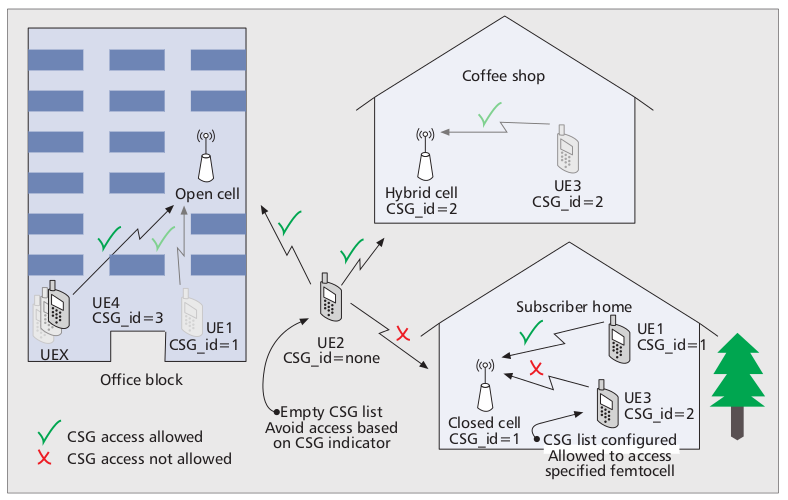 Figure # 1 is an example of the various types of femtocell access which are defined by the 3GPP. The closed access provides the contracted services to users who are part of the CSG, providing some level of security and privacy when accessing the femtocell, further that all resources are available for femtocell users, guaranteeing certain level of QoS. However, the users who are not part of subscriber's group can not access the network, except for emergency calls. This type of access generates more interference, since nearby mobiles try to connect to the femtocell, but they will be blocked due the access method, so a large number of implicit signaling is generated in that area.

On the other hand, open access has a good advantage for the service provider because part of the traffic is diverted by femtocells, releasing in largely, the macrocell's load. However, this type of implementation provides an increasement in the handover because a UE who moves to an area where there are several deployed femtocells, it will perform handovers on each femtocell with better signal quality, thereby increasing signaling traffic. From this perspective, the hybrid method may have advantages, but the shared resources by each femtocell must be managed carefully in order to not degrade the quality of service for the users into the femtocell.