Orthogonal Frequency Division Multiplexing (OFDM) is a frequency multiplexing scheme characterized by sending a certain amount of carrier frequencies in a specified bandwidth [7] [8], each of these carriers, transports information using modulation schemes such as QAM or PSK (QPSK, 16QAM and 64QAM) [10]. One of the main advantages of this type of multiplexing is about the fading of signals, delays and in general against interference, also has excellent characteristics against multipath. Furthermore, with QAM and PSK modulations is possible to transmit more amount symbols per cycle.

Figure # 2: Representation of frequency and time for an OFDM signal [7].

The different frequencies (n-th) called sub-carriers, in Figure # 2, must have equal spacing between them, and should remain constant in order to avoid the signal overlapping which cause interference between them.This separation between sub-carriers is given by the following expression:

Where w is the frequency, n the number of subcarriers and f the separation between them.

For this, the 3GPP has defined a separation between OFDM channels, it is known as a guard band or guard interval and aims to create a distance between adjacent frequency channels to avoid interference between them. In the practice, we cancel the transmission of a number of sub-carriers in the spectrum section where the channel ends and the next begins, repeating at the top and bottom of the channel, thus reducing the usable bandwidth per channel, seen Figure # 3. 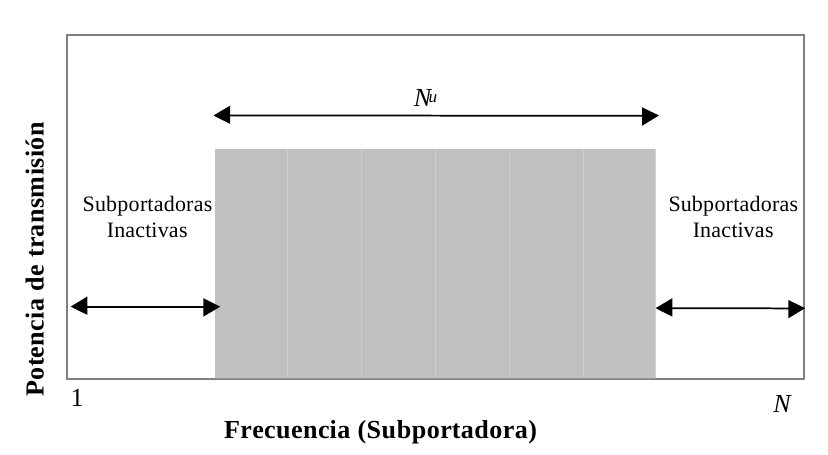 Overall, the study by the 3GPP [7] discussed the feasibility of using OFDM for downlink UTRAN and validates their inclusion, it says that OFDM improves performance compared to HSDPA Realease 5, however, the introduction of a more advanced and more complex system, such as OFDM, does not generate a significant difference in performance at the receiver side, and therefore, only recommended for the downlink.