Another problems that cause degradation of the transmitted signal are the effects of penetration in any type of building, every time the signal is refracted within the walls of a building or house will lose power, which translates into low signal received by the mobile or base station, depending on the direction of the link. Penetration has a significant impact in terms of mobile networks, because cells in LTE can have a typical coverage of 30Km [2] and [3] (even among 5Km to 100km), this causes the power decreases while furthest from the EU ("User Equipment") from the eNodeB, this can be seen in Figure # 2, where different micro-cells provide coverage for a given area, each of these micro-cell has its point of lower power signal near limits with other micro-cells. If we combine the scattering effects cited above and penetration in buildings or homes, it easily follows that the more far locations from the transmitter power will have more problems and therefore coverage within buildings. 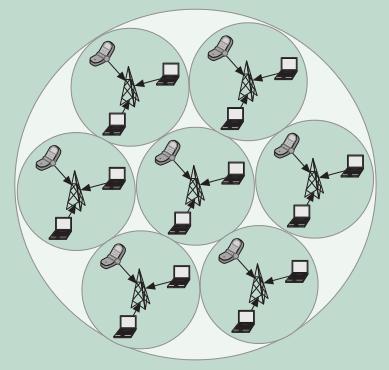 We might think that the only solution is to increase the transmission power to counter penetration losses, and in turn, would be used for a greater coverage, however, the power levels that a power station can radiate are standardized within of spectrum management policies for each country, in addition, increasing the transmit power would cause an increase on the coverage area, as mentioned previously, generating interference in the adjacent eNodeB and a degradation in the signal perceived by the user.